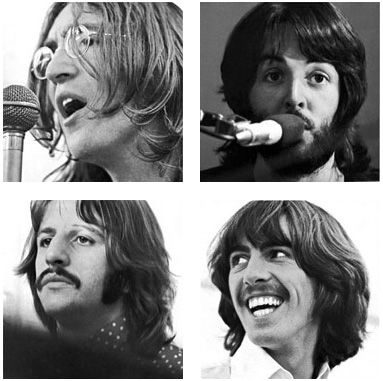 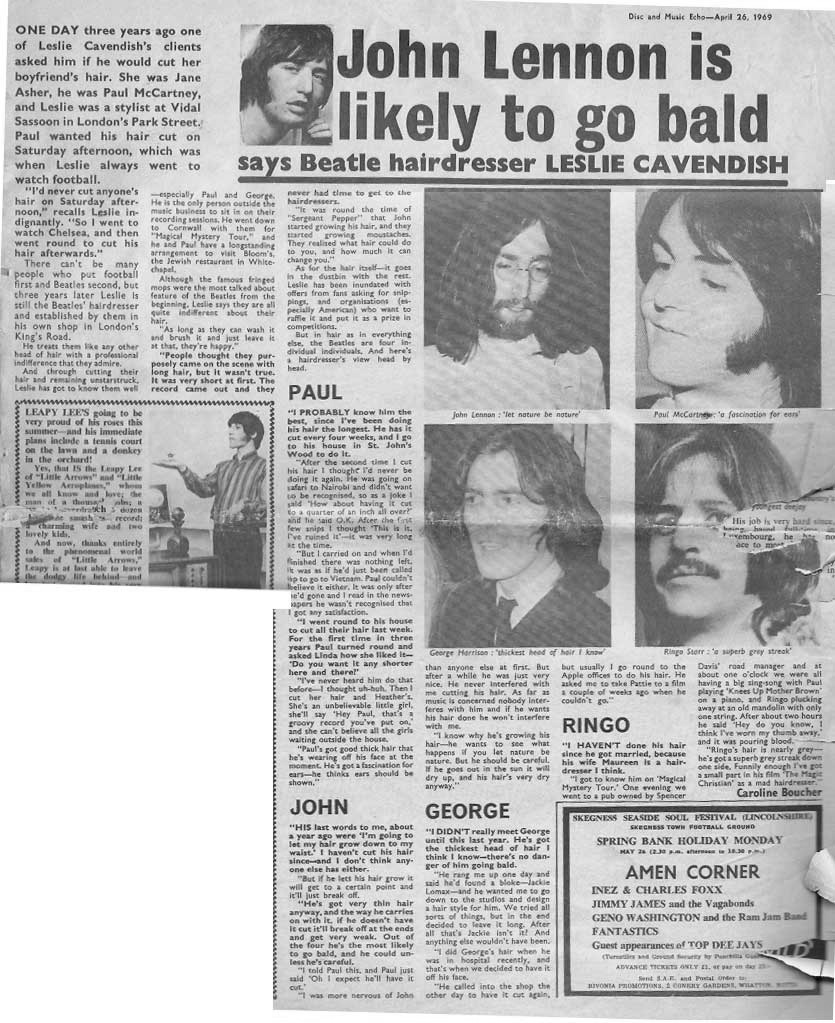 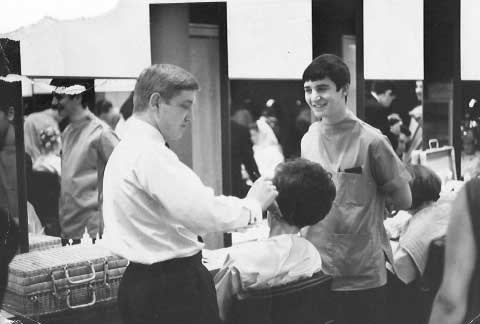 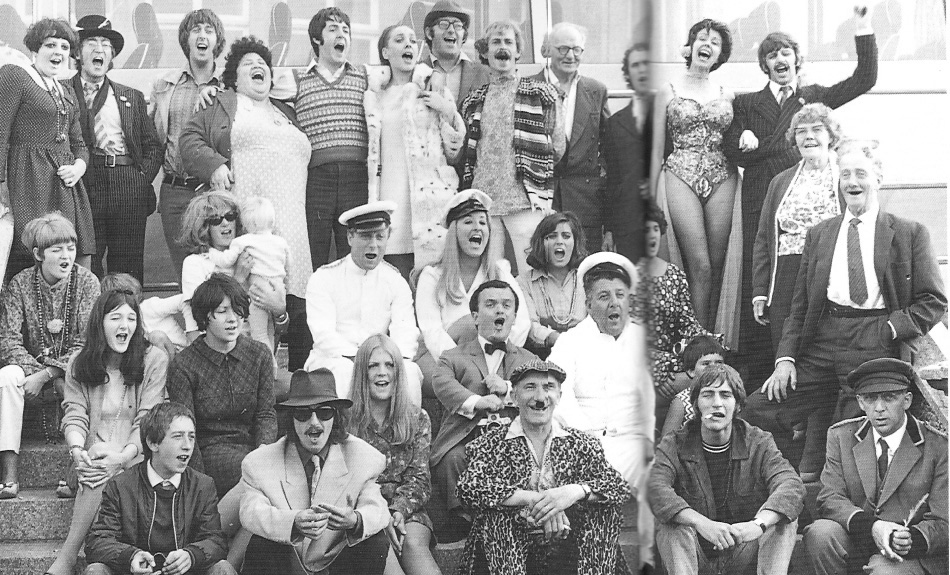 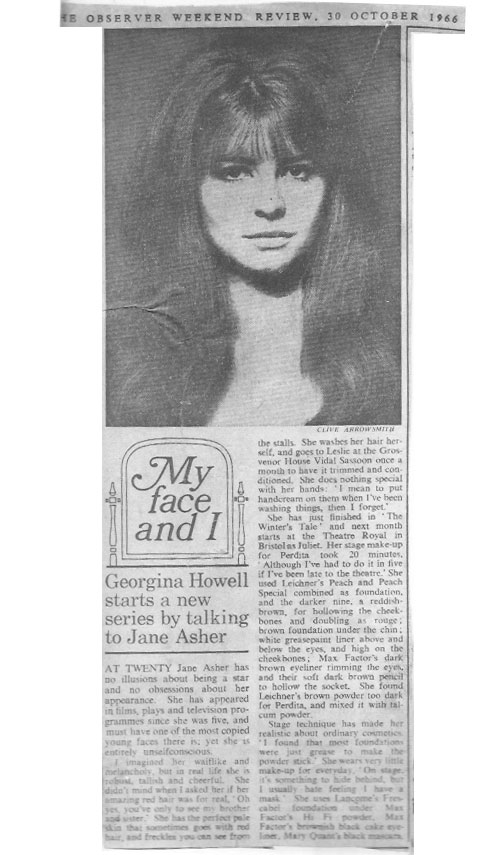 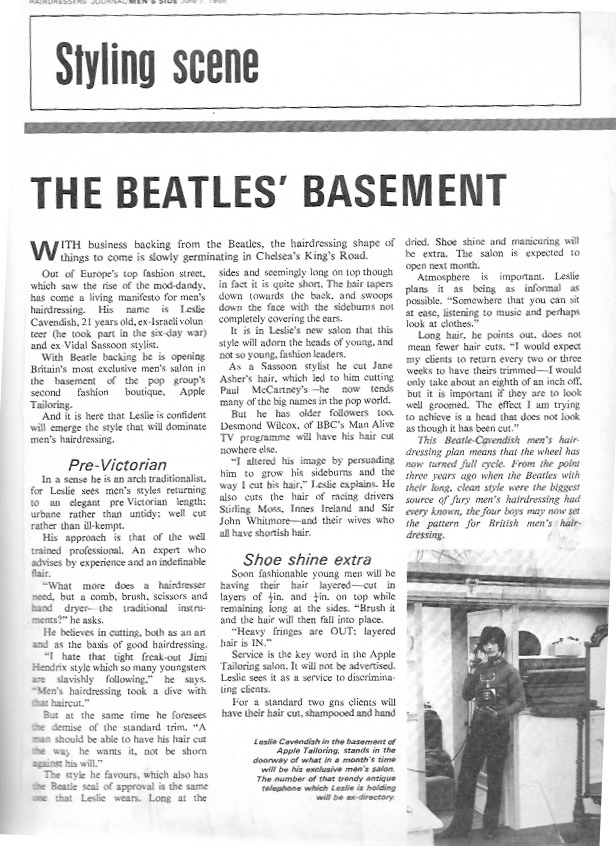 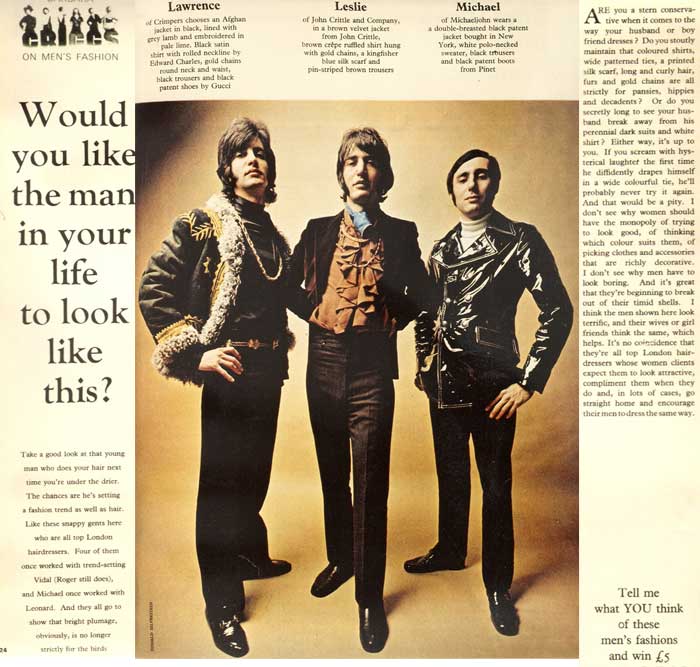 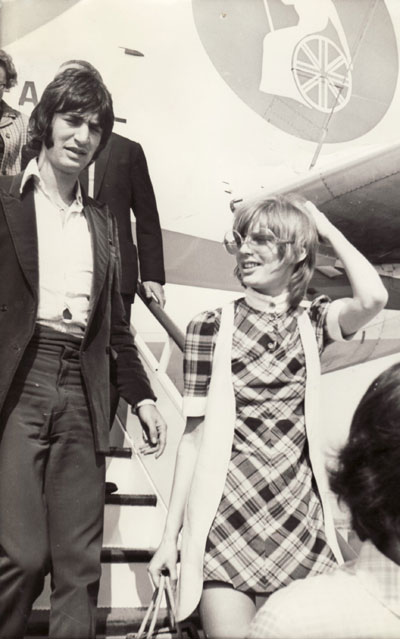 I was born in London, in the East End – Cable Street. At the age of 6 months, my family moved to North London where I later was enrolled in the Chandos School and was a Beatles fan even then. I became captain of the football team at the school. I left school at 15 with no particular trade in mind. One day I had to meet my mother at her hairdresser’s. I was so impressed by the beautiful women in the salon that from that time I was set on becoming a hairdresser!

Shortly after, I started an apprenticeship at Vidal Sassoon’s, with Vidal himself!, at their salon in Bond Street. I then moved as a junior to a new salon at the Grosvenor Hotel. I completed a three-year apprenticeship in only two years.

My boss was Roger, who I met whilst working at the salon and who was Vidal’s right hand man. He used to do Jane Asher’s hair. I had the honour of washing and blow drying her hair. That in itself took over an hour but she had lovely long red hair, a real pleasure to work with. One Saturday morning Jane came into the salon but Roger was not available. Jane asked if I could cut her boyfriend’s hair. Now, I am a Beatles fan so I knew she was referring to Paul McCartney. I am also a Queen Park Rangers’ fan and they were playing that day so I risked asking Jane if we could delay the appointment until 6pm that evening. Jane had no problem with that and said to come to Cavendish Avenue in St John’s Wood after the game.

I arrived at Cavendish Avenue that evening and I recall lots of girls outside the house. Paul McCartney answered the door and was very nice to the fans, posing for photos and signing autographs. Inside, Paul greeted me with: ‘Come and cut my barnet’ (Editor’s note: ‘barnet’ or ‘Barnet fair’ is cockney rhyming slang for ‘hair’). I went to his bedroom to set up and washed Paul’s hair in the sink (his bedroom was ensuite by the way). I trimmed his hair and then Paul invited me back downstairs to listen to some music. Paul played me some rough tracks that I realised later was some of the music they recorded for Magical Mystery Tour.

After that visit, I would get a call from Paul or Derek Taylor from time to time asking if I could go round to Paul’s house and blow dry his hair. Derek was a truly lovely man. It was at his request that I later took in Chris o’Dell. I went out with Chris but really we were just good friends. We were known to be close to the Beatles so we could get into lots of places – all the smart clubs. I got her a job as George’s personal assistant. [Chris was the ‘Miss O’Dell’ on the B side of George’s 1973 hit ‘Give Me Love (Give Me Peace on Earth)’.

On one occasion at Paul’s house he told me that Jane was working in South Africa. Paul asked what I could do to disguise him and so I laughingly suggested that I could cut his hair off. He said okay and so I did! Paul’s hair at the time was past shoulder length and I cut it extremely short. As a result, Paul managed three weeks in South Africa with Jane, unrecognised. It was only when he returned to Heathrow, with his hair having grown back a bit, that he was recognised.

It was George Harrison and Paul who invited me on to the Magical Mystery Tour bus in 1967. As it was to be a two week trip, I had to get my parents to lie for me so I could get off work. However, that plan backfired as I was spotted in the newspapers waiting for the bus with all the others in Allsop Place!

I was on the bus the entire trip. I was only 19 or 20 at the time but I could tell that things weren’t so harmonious with the Beatles. Paul was really taking over the leadership of the group. After Brian Epstein’s death the group seemed to be undirected and Paul tried to pull them all together. From what I can remember, Paul always consulted John. However, I never heard him asking George and Ringo what they thought about his plans. Saying that, I do remember Paul saying that George was a good musician. The whole experience with the filming of MMT was a bit wacky but I reckoned it must be the way even MGM did it as, after all, it was Beatles! As far as I can remember, it was all filmed with small hand held cameras. I watched it on TV when it came out on Boxing Day. Even though it was broadcast in black and white, I thoroughly enjoyed it. It felt a bit like my own home movie. I remember many of the performers quite well. Victor Spinetti was witty and spent all of his time with John Lennon. Ivor Cutler was a great laugh and even more witty than Victor. I have strong memories of John always asking questions: ‘why this?’ ‘why that?’. I also remember being in a pub in Newquay, where Ringo played the piano, accompanying Paul on mandolin who sang ‘Knees Up Mother Brown’. It was one big party the entire trip. The pub was owned by a friend of the musician Spencer Davis, who was also on the bus.

Back in London I was invited to the MMT launch party at the Royal Lancaster Hotel. The party was on 21 December. Some years ago I came across the invitation – what luck as I could have easily thrown that out! I contacted Sotheby’s about it who were a bit dubious until they checked out who I was. They had never seen this item before but they were able to sell it for me at auction.

The Beatles had offices in Wigmore Street before they moved to Savile Row and set up Apple. John regularly rang me to come round there to cut his hair. Yoko was always with him. I can remember this small, not very attractive woman, with this huge mass of black hair. John often turned to Yoko when she was speaking and said: ‘What? I don’t understand, please explain’.

It was about this time that the Beatles were talking about ‘Apple Hairdressing’. Paul had said to me that they needed a place where they could all get their hair done privately. Apple bought some premises on the King’s Road opposite Chelsea Art College. So that’s how ‘Apple Tailoring and Hairdressing’ started with me in the basement and the tailoring shop above. It was a private establishment but insiders could get the phone number, ring and get an appointment. We didn’t take people off the street. People like Robin and Barry Gibb of the Bee Gees got their hair done there. When we first moved in, I found some tiling that I thought would suit the premises and Derek handed me £3000 to get the job done. There was money like that going everywhere. It was an exciting project but we had no idea that the tailoring side of the business was doing poorly. Paul got a phone call one day from the clothing manufacturer who supplied Apple Tailoring. Money was long overdue from the Baker Street salon. I remember an exasperated Paul saying ‘f… this. I’m a musician’. That side of the business shut down not long after.

January 1969 and the Savile Row rooftop concert…. I got a phone call saying that the Beatles were doing a concert the next day. I was always on call for them in case they needed their hair doing for an event. I was glad to do it. I went to the Apple offices and started to do their hair when I realised that the concert was to be on the roof! I did my best under the circumstances. It was crowded up there with the Beatles, the film crew and all the equipment. I sat on a step and Chris O’Dell perched on the chimney. It was certainly an exciting time. I don’t know if anyone really believed it was to be the last time they performed together. I had seen them perform once before at a Christmas show. I was in the wings and couldn’t hear a bloody thing!

On the many occasions I went to the Apple offices, I remember seeing Richard De Lello, the ‘house hippy’, and wondered just what he did there. (Editor’s note: Di Lello wrote The Longest Cocktail Party about his time at Apple).

Linda wasn’t a true blond. She had a lot of red in her hair. Linda was always there supporting Paul and she got him through his depression over the breakup of the Beatles. She also brought her family in to help him with various matters. I would ring up when I was going to be in the neighbourhood to watch a cricket match at Lord’s. I had a spaniel named Ernie at the time and he used to hang out with Paul’s dog Martha. They became best friends. I was still cutting John and George’s hair. I only occasionally worked on Ringo’s hair because he was married to a former hairdresser and so didn’t need me so much. I was still friends with Chris O’Dell who was later to marry the Hon Anthony John Mark Russell. Ringo is godfather to their son and Pattie Boyd is his godmother. I met Pattie when she was with George and then later on met Eric Clapton. I did get invited to do Ringo’s hair while he was filming ‘The Magic Christian’ with Peter Sellers. I couldn’t tend to it on the set as I didn’t have an equity card so I just had to hope the equity card-holding hairdresser on the set didn’t mess up my work!

In 1969, the rumour resurfaced that Paul had died in a car accident in 1966. Some bright reporter thought of interviewing Paul’s dentist and hairdresser to get their opinion. The dentist had known Paul since 1964 and, coupled with my experience as a hairdresser, I was able to state emphatically that the Paul whose hair I had been cutting and styling for years was the same man. I could tell by the distinctive part in his hair. A hairdresser always knows!

I recall an interview I gave to a newspaper, Disc, in which I was asked about the Beatles hair. George had the best hair – full and with a natural wave. Unfortunately, I said something about John having the thinnest hair and was thus likely to go bald – one day! The press ran a whole article on ‘John is Bald’. I was shocked and even more so when John rang me to ask what I was doing! I apologised and John said to forget it as it had happened to him as well. Something about being more famous than Jesus!

Some of the other people whose hair I was fortunate enough to cut included Dusty Springfield, Tony Curtis, Peter Cook, Dave Clark, Nina Simone and Billy Preston and Keith Moon. Moon was crazy but he was always a gentleman in my salon. One of my fondest memories as a teenager during those crazy years was the time I found myself in a lift between Diana Dors and Jayne Mansfield. Heaven for a young lad just discovering bosoms!